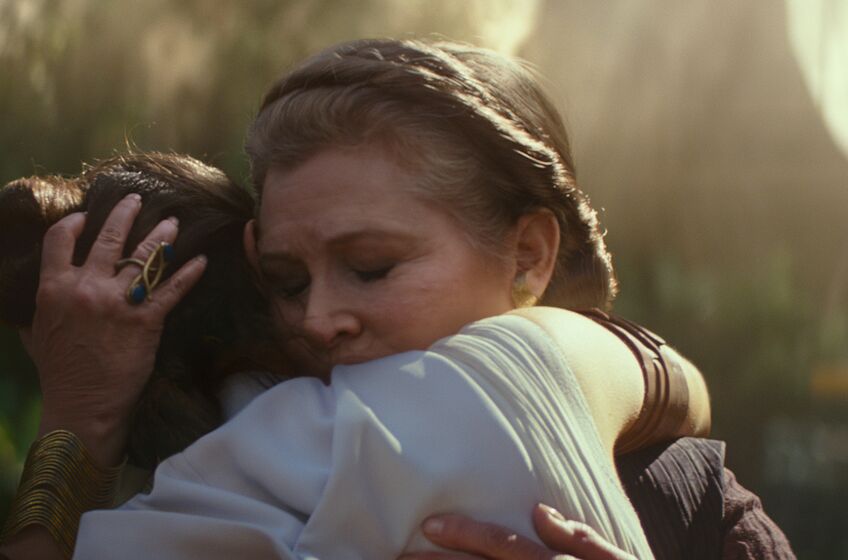 Star Wars Resistance recap: What did Kaz find in the Sith Temple? by Susan Lulgjuraj
A Mandalorian with ethics and morals: This bounty hunter is soft! by Julie Gray

Resistance Reborn follows Leia, Poe, and the rest of what remains of the Resistance as they work to rebuild their efforts and stay in the fight. Everyone should read this Star Wars novel.

The journey to Star Wars: The Rise of Skywalker nears its end — and so does the series of books that tell the stories leading up to the epic conclusion to the Skywalker saga.

Rebecca Roanhorse’s Resistance Reborn is one of the final stories serving as a “prequel” to Episode IX. But it is one of the most significant, and the one most worth taking the time to read.

No, you don’t “have” to read or watch anything before you see The Rise of Skywalker in December. But you “should” read this.

In addition to prominently featuring characters we already know and love, Roanhorse pulls characters from just about every possible medium: other canon novels, but also comics, TV shows, and even Battlefront II.

Seeing all these characters coming together and fighting together gives you a little bit of an Endgame feel (though let’s save that comparison for after whatever we’re walking into next month). It’s special. It’s fun. And it’s an important reminder that all we have seen so far has been leading up to something bigger than we can fathom at this point.

Can those who aren’t familiar with the Star Wars expanded universe still enjoy the book? Of course. You get plenty of Leia Organa and Poe throughout the story, characters whom most audiences are plenty familiar with by now.

Understanding the significance of the story itself really only requires the prior knowledge that the Resistance is in trouble and needs help — you’ve likely already gathered that information from The Last Jedi.

Will the significance of some characters and their relationships to each other go over your head? A little bit. Can you pretty much gather all you need to know from context? Absolutely.

An OG character comes back one last time

There are a lot of characters — old and new — in this story. It’s impressive that Roanhorse managed to bring in so many people without making it impossible to follow. Each character has their role and their place, and it’s especially exciting when it’s a character we have known since the very beginning.

Wedge Antilles is one of many characters from the original Star Wars movies that have been rumored to return in The Rise of Skywalker. Without giving anything away, it’s very, very unlikely that he will make an appearance to fight alongside the Resistance in the film. But the author did an amazing job of making his final fight a good one.

At first, Wedge is reluctant to leave his quiet, peaceful life to join the conflict between the Resistance and the First Order. But he agrees to take part because that’s who Wedge Antilles is. He’s going to do everything he can to make sure good wins over evil — even if that means putting his life on the line in the process.

No spoilers, but the way Wedge’s story ends will only make you love him more. Roanhorse risked a lot bringing back a character so many still remember and love from the original trilogy — the same way Wendig did. But she honored his legacy with a “sendoff” that will make his absence in the final movie completely acceptable.

There really isn’t much to Rey’s story in this book. She has significantly fewer lines than her fellow Resistance fighters (not counting Rose) and doesn’t add much to the story. If she hadn’t been there at all, the whole thing probably could have had the exact same outcome without her.

But Roanhorse absolutely nails the major female characters leading various elements of the plot — even Maz. So why didn’t Rey get more of the attention she deserved?

This likely was not an accident. Not because she is an insignificant character or doesn’t have any room to grow, though. Quite the opposite, actually.

In technical terms, Rey serves as a “flat” non-dimensional character in Roanhorse’s narrative. This doesn’t mean she’s boring or that she doesn’t matter — it just means she does not develop from start to finish. She remains exactly the same, even when she does have minor roles throughout the story. She doesn’t change because she can’t. Not yet.

We are about to witness the biggest theatrical release in Star Wars history, and not just in terms of ticket presales. The Rise of Skywalker is the film that will end the Skywalker saga and could change Star Wars as we know it.

Rey is a main player in this story. Based on what we’ve seen in trailers up to this point, it seems like she is going to go through a lot. A lot of training, a lot of character growth. The purpose of Resistance Reborn is not Rey’s story. It’s the Resistance’s story.

The time to tell Rey’s story, to give her a complete and complex arc and to show who she can and will become, is soon to come. This book simply wasn’t it. And the same likely goes for Rose. This was not her book. There is plenty more of both of these women to come.

Should you read Resistance Reborn before you see The Rise of Skywalker?

The short answer? Yes. The longer answer: Yes, but with two exclamation points!!

Again, there is no “required reading” when it comes to Star Wars. If you don’t have time or have zero interest, you’re not going to walk into the movie completely lost.

But there is one reason I’m recommending people give it a go before December 20, and one of them is HYPE.

Even though I was already excited for the film — which was just over a month away when this book was released — I’m not sure I was “ready.” We already know we’re not going to get nearly as much Leia screen time as we’d like. We know the story is going to pick up about a year after The Last Jedi, and it’s likely going to be so action-heavy that it’s going to force us to jump right in without more than an opening crawl to fill us in.

Resistance Reborn not only gives us all the Leia Organa — she’s a main character, and plays a huge role in the events that occur in the story — it also shows us what happened directly after the last movie. We’re right back there in the Falcon mourning all the losses and wondering where the Resistance is going to go from here.

We’re given just a little bit more to hold us over until the next and final chapter in this story. And it’s worth every page.

We know where the Resistance stands now. We know that they might actually have a real shot at beating the First Order. We’ve been briefed, and now we’re ready to march into TROS with our Kleenex and significant others and we’re ready for all that is to come.

Well. As ready as we can be, anyway.

This book is a thrilling, brilliantly crafted story that will warm, break, and prepare your heart for the final battles on the horizon. I don’t recommend you read the entire thing in one sitting like I did — it takes a bit to process everything. But if you do have the time, give it a read. I can guarantee you won’t regret it.

In this Star Wars story, there is a little something for everyone to enjoy.

You can pick up your copy of Resistance Reborn wherever books are sold.